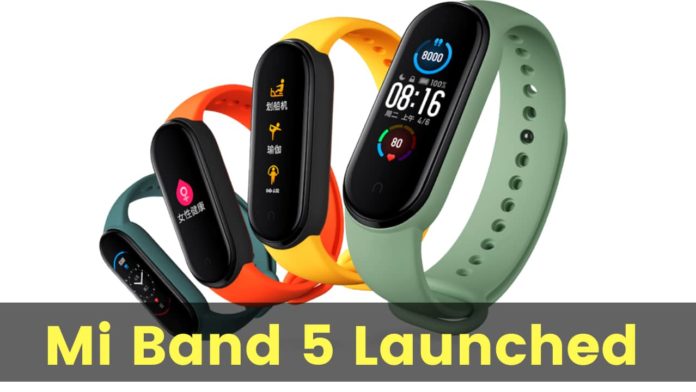 After various leaks and rumours, Xiaomi has finally launched its new fitness band Mi Band 5 in China. The new Mi Band 5 is an upgraded version of last years Mi Band 4. Compared to previous generations of Mi Band, The new Mi Band 5 seems like the best upgrade.

Mi Band 5 features a 1.1 inch OLED dynamic colour display. The new display has a larger screen to body ratio with reduced bezels; also, it has a capacitive home button on the front. The band gets 100 plus new animation watch faces inspired from popular Animated Series.

The band is available in four colour variants Red, Black, Green and Yellow. Talking about sensors on the band; It has a SpO2 sensor which can track your blood oxygen saturation level along and Heart Rate monitor sensor.

The band has 11 professional activity modes which can track activities like Yoga, Elliptical, Skipping rope, Rowing Machine, and Indoor Cycle. Mi Band 5 comes with better sleep tracking algorithm, and now it can track monitor your stress and breathing quality. It has a new female health mode, Which monitors your menstrual cycles.

The band is available in two variants, one with NFC and one without NFC. NFC Payment feature is now available for global option as well. The Chinese variant of Mi Band 5 has Xiao Ai voice assistant whereas the global will variant will have Alexa assistant support.

The main highlight feature of the Mi Band 5 is magnetic charging. The new band supports magnetic charging, and Now you can charge the band without removing the straps. The band has 185 mAh of battery which can last up to 14 days on a single charge.