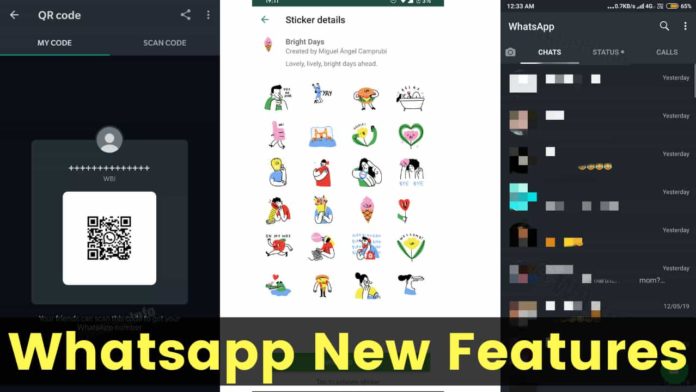 A group of features were announced by Whatsapp, which were teased to release after pushing the update in beta version. The features include Dark mode for Web Whatsapp, QR to accounts quickly, animated stickers and long-press option to expand the video while in a video call.

Apart from the beta features, there are other features such as searching messages by date and multi-account for Whatsapp. These features have been in the long-awaited list of upcoming features, anyhow these features were not pushed into beta yet.

The dark mode in Whatsapp has already been rolled out already for all the iOS and Android devices. Now, Whatsapp is planning to release the same update for its computer app version. The computer app version is available in both Windows and iOS OS. It is not yet clear, whether the update applies for the web WhatsApp or not.

Whatsapp stickers are a big feature for many of its users, and it has got a wide range of static stickers available in play stores. Anyhow, now Whatsapp has come up with Animated stickers which would help those who love to express themselves through stickers.

QR codes feature to add new contacts is also the latest addition for Whatsapp. Through this new feature, the user can directly scan the QR code of another user to quickly add a contact without having to add the number in contacts to send a message. This would mostly help the users in making WhatsApp payments for those who are not in their contacts.

Currently, Whatsapp video call feature supports 8 users to talk at a time while in a group call. A new feature is seen in the beta, where clicking on a user’s video can expand that window for more focus. This feature would make video calls more interactive and help people stay connected.