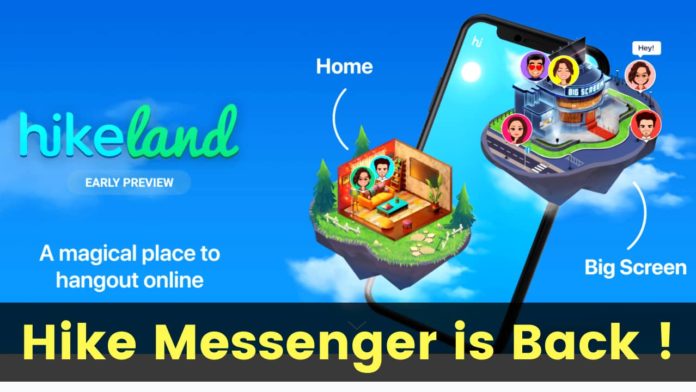 The India based social networking app, ‘Hike,’ has launched an early preview of its much-awaited feature of ‘Hike-land.’ The launch of this feature is expected from many days, and finally, the early-preview has revealed the suspense.

HikeLand is a virtual world feature coming the first time in mobile phones, where friends can hang out virtually through the app. There is a virtual room in Hikeland, where two friends can sit together and watch a movie or videos.

So far as per the early release video, it is clear that the HikeLand would play videos from YouTube. The streaming would take part simultaneously for both the friends as they sit together and watch. There is also an option for the users to chat along when they are watching the TV. They can share their experience through chat, Hike stickers, and also through voices.

The selection of the room and its theme are customized, and the user can choose as per their tastes to make it more fun. Anyhow, the room can accommodate only two people as per the video released by the Hike team.

Hike CEO has mentioned, this new feature would completely shift the user experience and show new ways to use the technology. Also, the CEO of the Indian-based social networking company, claims it as the mobile-first virtual feature. More features are yet to be revealed, as the CEO mentioned, as this is only the early preview shown to the world.

This indicates, there are many more features to be added as soon as the feature goes live for everyone’s mobiles. As of today’s common online world is confined solely to like, comment, and shares, this new feature would pave the way for new ways of experiencing social networking. Hike’s new feature might surely, bring new ways of socializing with people around.