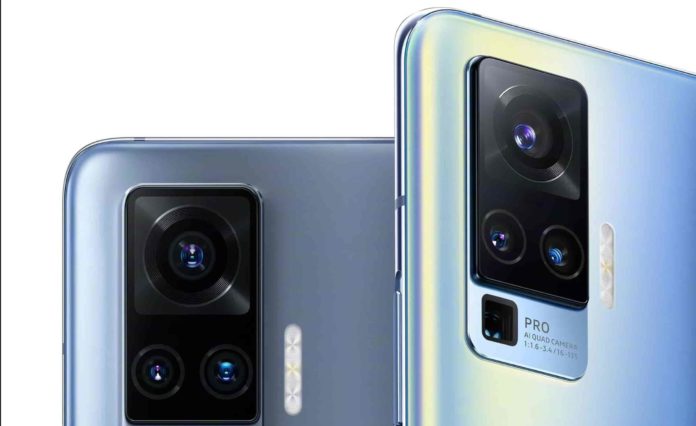 Vivo has recently released the details of their upcoming smartphone Vivo X50 which is to be launched on June 1st. There is also another model X50 pro, which is going to be launched along with X50.

Before the launch date, the color options and the camera setup style were teased by a Chinese microblogging site. As per the teased reports, the new Vivo X50 and X50 pro would be having a display with a 90Hz refresh rate. 90 Hz refresh rate display might be an inspiration from OnePlus, as it has changed the game for smartphones.

Also, X50 pro would be housed with a 48-Megapixel camera with a per scope styled design. X50 is will be available in Pink color whereas the X50 pro will come in white and vanilla colors with a shade of blue for each. Both the phones feature a hole-punch display to accommodate the front camera and also to cover the screen entirely without any loss of display.

The camera on X50 is unique with a micro gimbal system, which is an individual camera unit among smartphones. The micro gimbal camera helps the user to get less shaky pictures with increased clarity and quality. X50 Pro is also rumored to have the same quad camera set up similar to X50. But, it is still unclear whether both the sibling models will have the same quad camera set up.

Speculations say that the periscope style of the camera can be expected for both the phones. The remaining details, such as RAM, Processor, Storage, battery, and other features, are not yet available. Even the pricing details were not leaked anywhere, and we have to wait to see how Vivo would price these different phones. As the release date of the pricing is nearing, we may get more details from the company.

Apple’s new Micro LED for Watches may not be Launched this...

Xioami’s Mi Band 5 to Get Launched on June 11th: Reports