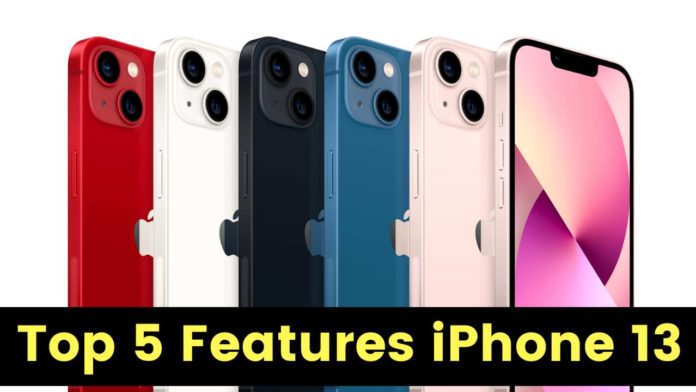 Apart from flagship phones, Apple has also launched the iPad 9th Generation, iPad Mini, and Apple Watch Series 7 at the event. Out of all the products launched at this event the iPhone 13 stood out to be the best budget phone from the brand.

Here are the top 5 best features of the new iPhone 13 Mini:

iPhone 13 Mini features a smaller design form factor. It comes with a 5.4 inches display panel with a resolution of 1080×2340 pixels. This OLED display panel supports is HDR 10 and Dolby Vision.

The display brightness can go up to 1200 nits. High brightness nits will offer a better outdoor screen viewing experience. Talking about the protection it has scratch-resistant ceramic glass which is durable and long-lasting.

Video content consumption has been rapidly increasing since the last few quarters. Social media platforms do rely on Videos a lot. Keeping the trend in mind, Apple has added the Cinematic Mode feature in the iPhone 13 Mini.

The Cinematic Mode will be very much useful for content creators. This mode has professional videography features which will drastically improve your video quality.

Apple has always been ahead of its competitors in the smartphone segment. iPhones are known for their blazing fast performance. The new iPhone 13 Mini is no exception, it runs on the Apple A15 Bionic chipset.

The New A15 Bionic processor uses 5-nanometer technology which has around 15 billion transistors. It has a new 6 core CPU out of which 4 cores have high efficiency. The new 4 core GPU on the A15 is 30 percent faster than its competitors.

#4 Cameras of a Flagship Phone:

The new cameras offer better stabilization as it has Sensor-Shift Stabilization System. On the front side, it has a 12-megapixel f/2.2 sensor which now supports the center stage. With iPhone 13 Mini you can record 4K HDR videos up to 60 fps and 1080p Full HD videos at 120fps.

We all love to have a faster internet experience. Keeping the user interest in mind Apple is now accepting change and now offers better 5G chips on the new iPhone 13 Mini. Compared to last year’s iPhones the new iPhone 13 series including 13 Mini has more 5G bands.

Additional 5G bands on the new iPhone 13 Mini will offer better coverage and a faster speed experience. Apple has added a smart data mode on the iOS 15, which automatically switches between 5G to LTE to conserve battery life.

7 Netflix Hacks That Will Change Your Streaming Experience

Hide a Messy Background during Work From Home in Zoom, Skype and Teams