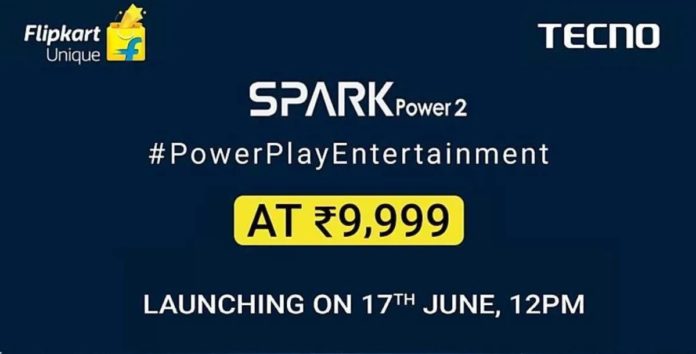 Tecno Spark Power 2 is going to be launched in India on June 17th as per the details teased on Flipkart. Few key details were revealed on the Flipkart site ahead of the launch.

The dedicated page in Flipkart has the pricing and specification details of the new upcoming Tecno Spark Power 2 smartphone were revealed. Among which, one of the features claims that Tecno Spark Power 2 will be having stereo sound speakers with quad-camera set up at the back.

Also, the official twitter handle of Tecno mobile has released a teaser about their upcoming Tecno mobile 2. The teaser revealed that their upcoming phone would be available for sale on Flipkart on June 17th at 12 PM IST. The teaser also throws some light upon the fast charging feature on Tecno spark, where one can get 3 hours of battery backup for 10 minutes of charging.

The hashtag #BestBatterySmartphone has been put to indicate their solid battery support and fast charging feature. On the other end, Flipkart has shown details on it’s a dedicated website about Tecno Spark. Flipkart has mentioned the price of Tecno spark 2, which is priced at INR 9,999. This indicates Tecno spark is a budget-friendly phone that has high battery capacity.

The phone is claimed to get a battery backup up to 4 days on a single charge with two color options of Green and Black shades. There is also a water-drop notch that would be visible over the front side of the screen. Further, the looks of the phone were also revealed, which has a speaker grille at the bottom along with port for USB and 3.5 mm jack. The first version of Tecno spark has a power of 6,000. mAh battery, and we might expect a bigger battery in the second version.