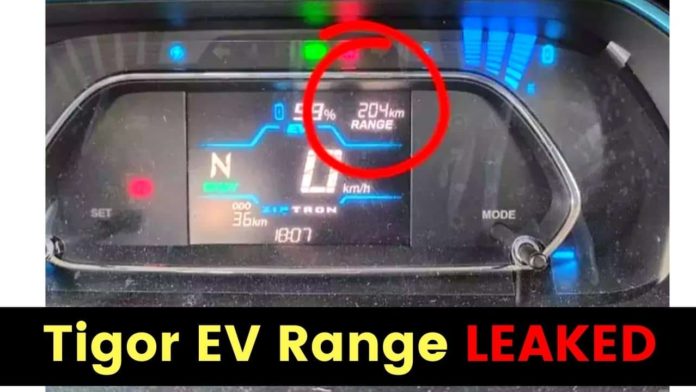 Indians have accepted the change and are now shifting to the new Electric era of cars. Due to rising petrol and diesel prices, consumers are seriously thinking about Electric Vehicles.

Tata Motors currently holds a 71% market share in the Electric Car segment. After the tremendous success of the Tata Nexon EV, The auto brand is ready to launch their new car, Tigor EV, which is based on Ziptron technology.

As per the recent leaks of the new Tigor EV, it is now confirmed that Tigor EV Range will be around 300+ km on a single charge. The recently leaked odometer image revealed the range detail. As per the leaked image, the car shows a 59% remaining battery and 99 kilometers running on the odometer.

Talking about the design part of the upcoming EV will look similar to the diesel variant of the Tigor. Though minor design and color changes would make it look more attractive, and that can be seen. The Tata Tigor EV will be available in Teal blue color.

“The photographs that have circulated on social media show the driver’s instrument cluster. As seen in the picture, the Tigor EV can go for 204 kilometers on a single charge with 59 percent of its battery remaining. A completely charged battery can go more than 300 kilometres, which is a significant improvement over the previous figure “According to the ToI study,

Speeds were limited to 60 kph in the city and between 80 and 100 kph on the highway, for comparison. The Tigor EV, like other electric cars, is more efficient in the city cycle than it is on the highway cycle, owing to the frequent stop-and-go situations that result in a higher degree of energy recovery. Tigor EV obtained a battery efficiency of 7.69km per kWh in the city, translating into an actual range of 200km (7.69km/kWh multiplied by 26kWh) under real-world driving conditions. The vehicle achieved a fuel efficiency of 6.98km per kWh on our highway test cycle, translating into a highway range of 181km (6.89km/kWh multiplied by 26kWh) on a single charge.

As per the market speculations, Tata Motors will launch Tigor EV at an affordable price. Compared to it’s flagship Nexon EV SUV the upcoming Tigor EV will cost less. Talking about the Tigor EV price, It might be launched at a starting price of around 10 Lac Rupees in India.

India’s automobile market is very price-sensitive, and the company that gets the pricing right has a higher chance of capturing the market. Tata Motors recognizes this and has priced the Tigor EV at Rs 11.99 lakh, with prices ranging from Rs 13.14 lakh to Rs 13.14 lakh, making it the most inexpensive passenger electric vehicle in India. The automobile has a design that is similar to the Tigor sedan, with a few small differences. The most significant difference is that the internal combustion engine has been replaced by an electric motor.