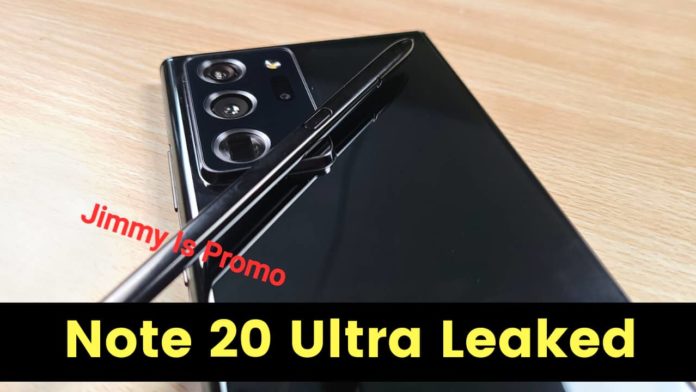 Samsung is about to launch its new flagship smartphone next month. The upcoming Galaxy Note 20 Series phones are one of the most waited flagship phones of the year. Due to which various rumours and leaks have surfaced online in the last few days.

Recently Samsung had accidentally revealed the images of the upcoming Galaxy Note 20 Ultra on its official Russian website. Today, real-life images have been surfaced online.

A Youtuber named as Jimmy Is Promo has posted Note 20 Ultra’s some real-life images on his social media account. The pictures shared by Jimmy is Promo are clear, though some essential parts of the photos have been cut out, but we get the idea of the design and looks.

Jimmy Is Promo has got Black Variant of the Note 20 Ultra. As predicted by earlier reports, the Note 20 Ultra has four sensors on the backside of the phone. The fourth sensor could be a 3D ToF or a laser AF. More details about the setup would be revealed soon.

On the front side, there is a punch hole type display. Though we have had expected an under-display camera on the Note 20 Ultra, Now it looks like we will have to wait for this feature. The display bezels are small, and the display has a little bit of curve, Though we have expected a flat screen.

In another Tweet, The YouTuber has posted a screenshot which mentions Android details. As per the posted screenshot, the upcoming Note 20 Ultra will run on Android 10. It will have Samsung’s own One UI 2.5 out of the box. The YouTuber claims that Samsung has changed the position of S-Pen and Loudspeaker. They have been moved to Left Side of the phone.

Talking about the launch date, Samsung is planning to launch the new Galaxy Note 20 Series smartphones next month. If we go by the earlier reports, Samsung might launch these phones on the 5th of August.