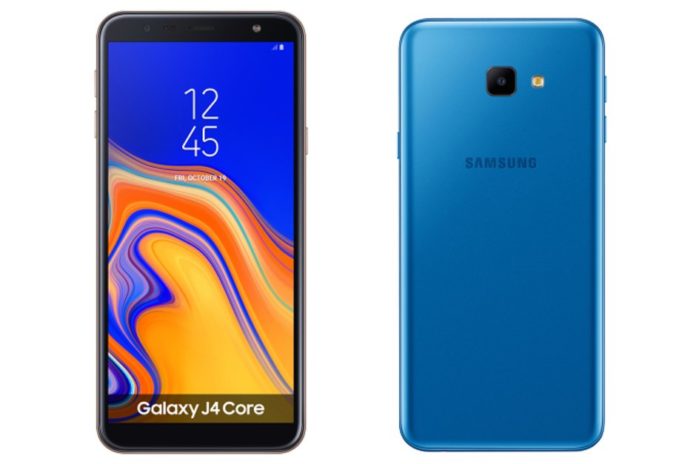 After the success of Galaxy J2 Core in India, Samsung has announced there new budget smartphone Galaxy J4 Core. Just like the J2 Core, New J4 Core also runs on Android Go which is based on Android Oreo 8.1.

Galaxy J4 Core is already listed on the Samsung site, yet they have not mentioned any details regarding the price of J4 Core. Looking at the hardware offered by Samsung for J4 Core, it may cost you around 7000 INR in India. We can expect the phone to be out by the end of this year.

The Galaxy J4 Core sports a beautiful and massive 6-inch(720×1480) HD+ TFT display with an aspect ratio of 18:9. It includes a 1GB RAM and internal storage of a 16GB which is expandable up to 512GB via an external SD card. The device comprises a 1.4GHZ quad-core Exynos 7570 processor, the motto behind designing the Galaxy J4 Core is to work well on less-powerful devices.

The Galaxy J4 Core has many connectivity options which provide WiFi 802.11 b/g/n, Bluetooth 4.2, USB 2.0, Glonass and 4G support. The handset also has an extensive battery of 3300mAh.

The Galaxy J4 Core will come with a preloaded lightweight customised version of Google apps like Google Go, YouTube GO, and Gmail Go. The brand has also worked on their software to work well with Google’s lightweight version of Android.