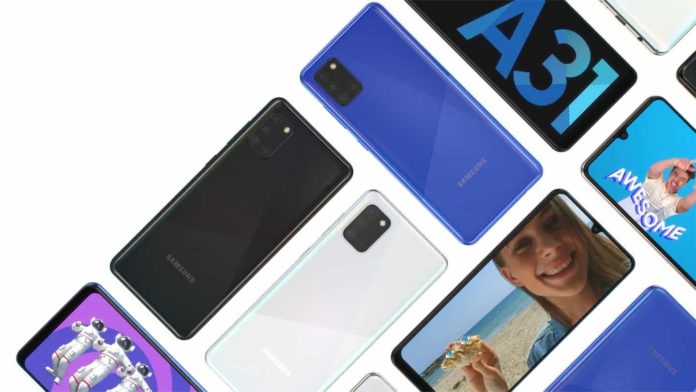 The Galaxy A31 is a mid-range smartphone from Samsung. MediaTek Helio P65 SoC, Quad Camera Setup, and 5000mAh of battery are some of its highlight features.

Samsung Galaxy A31 Price And Availability:

In India, Samsung Galaxy A31 is priced at Rs. 21,999. You can buy this phone online via Amazon, Flipkart, Samsung India site, and offline via Samsung stores starting from today.  No Cost EMI options and various cashback offers are being provided by Samsung and it’s partners. It is available in Prism Crush Black, Prism Crush White, and Prism Crush Blue color variants.

Galaxy A31 features a Super AMOLED 6.4 inch Full HD Plus display, which has an aspect ratio of 20:9. It runs on the latest Android 10 version and has One Touch UI 2.0 on top of it. MediaTek Helio P65 SoC is provided in Galaxy A31; It is an Octa-Core Processor. The phone is available in 6GB RAM and 128GB of storage, which can be further expanded up to 512GB via external Micro SD card.

On the backside of The Galaxy A31, there is a quad-camera setup that features 48 + 8 + 5 + 5 megapixel camera sensors. For selfies and video calls, Samsung has added a 20 Megapixel front camera with an aperture of f/2.2. You can record up to 1080p videos at 30fps.

The phone is powered by a 5000mAh battery, which does support 15W of fast charging. Connectivity features such as Wi-Fi 802.11, Bluetooth 5.0, NFC, Type C USB and 4G VoLTE are present on the Galaxy A31. There is a 3.5mm headphone jack on the phone. Talking about security, it has an Under Display fingerprint sensor and face unlock feature.