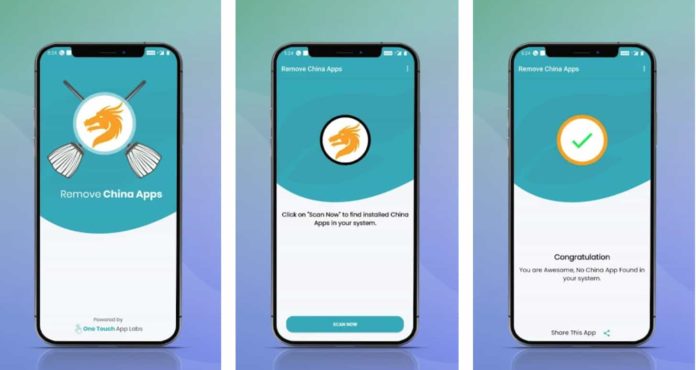 COVID-19 has brought a lot of Flak against China, blaming the origin of the deadliest virus to the world. Many countries already have to isolate the dragon country in various ways. There are many sectors where the whole world is dependent on China, and it is tough to avoid china in those aspects. When it comes to smartphones, there are many leading apps that are in the top list of Google Playstore.

Several campaigns are currently in trend to boycott china and reduce dependency on the country. As a part of it, many have already started to boycott Chinese applications. Along with this, there are several accusations on Chinese apps as they are secretly gathering user information.

The application scans your mobile phone for Chinese apps and pops up with the names of Chinese apps. The developer of the app ‘One-touch Applabs.’ stated that they would soon get an advanced version of the app. The advanced version would also remove the default Chinese apps that came while purchasing the phone. This app went live on play store on May 17th and has now gained 1.4 Lakh Reviews with a whopping rating of 4.8 stars.

The developer, OneTouch App labs, is an experienced app developer with over eight years of experience. The company is still working on the iOS version, as it is currently available in Playstore only. Once the app gets launched in iOS, the ratings on the App store might also go sky high as there are many Indian users on iOS as well.