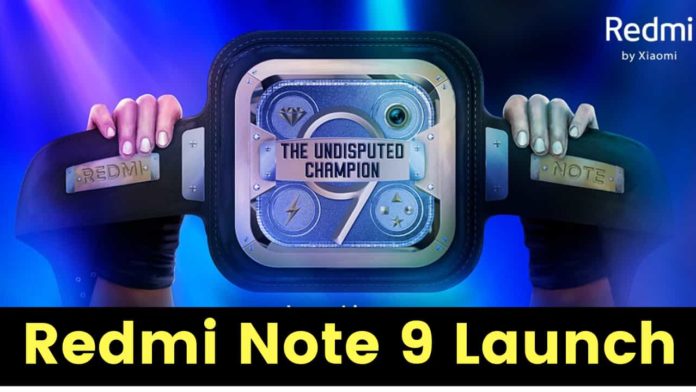 Xiaomi has officially announced the launch date of the upcoming smartphone. Today on Twitter Redmi India has shared a new poster image on its official account. The image mentions the details of the Redmi Note along with the date and time of the launch.

As per the poster, Redmi has held an event on 20th July noon for India. The poster does not mention the model number, but it is expected that the upcoming phone will be Redmi Note 9. In the global market, Redmi has officially launched Redmi Note 9 back in April. Now the smartphone is coming to India. Note Series is one of the most famous series of Redmi.

Redmi Note 9 has been already announced globally. Redmi Note 9 is available in 3/64GB and 4/128GB variants.

The base model is priced at 199 USD, (Around 14,900 INR) and higher model is launched at 249 USD (Around 18,700 INR) for Global market. India is a price-sensitive market, so lower price tags are expected from Redmi.

The moment we've all been waiting for! ?

The #UndisputedChampion, our next #MadeInIndia smartphone arrives on 20th July at 12 noon! ?

Packed with best in class specs and highest quality that's sure to make heads turn. ?

The smartphone runs on a MediaTek Helio G85 processor. It is available in 3/4GB RAM and 64/128GB storage variants. Android 10 bases MIUI 11 is present on Redmi Note 9. 9.

Talking about the battery, the Redmi Note 9 has 5020mAh of battery which supports 18W of fast charging technology.