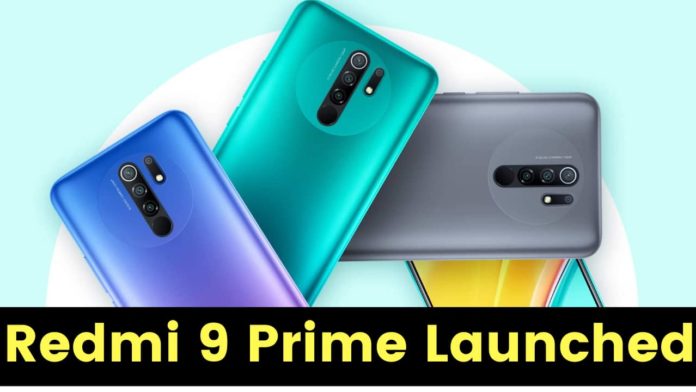 Redmi has announced its new Prime Series smartphone Redmi 9 Prime in India. The latest Redmi 9 Prime is a budget smartphone from Redmi.
The Redmi 9 Prime phone is available in four colours Space Blue, Mint Green, Sunrise Flare and Matte Black. It has fingerprint-resistant texture back along with unique circle decoration which includes a vertical camera setup.

Redmi 9 Prime features a 6.6 inch full HD plus dot drop display which is protected by Corning Gorilla Glass 3. The display has 400 nits of brightness along with 19.5:9 aspect ratio.
The phone runs on MediaTek Helio G80 processor. It has ARM Mali G-52 GPU which is clocked at 950MHz. It has LPDDR4X 4GB RAM and up to 128GB of storage. It has a triple card slot which means you can use an external micro sd card of up to 512GB.
Talking about the cameras, It has quad-camera setup on the backside of the phone which included 13MP + 8MP + 5MP + 2MP. The main 13MP sensor is a wide-angle lens with an f/2.2 aperture. The second 8MP lens is an Ultra-Wide angle lens with 118° FOV and f/2.2 aperture. The other 5MP & 2MP sensors are macro lenses and a depth sensor.
On the front side of the phone, it has 8MP of selfie camera which has an aperture of f/2.2 and 77.8° Field of View (FOV). You can record up to 1080p Full HD videos at 30fps.
It is powered by 5020mAh of battery which supports up to 18W of charging but with box you get a 10W charger. Talking about other features it has FM Radio, 3.5mm headphone jack, Bluetooth 5.0 and Rear fingerprint sensor. It runs on MIUI 12 based on Android 10.
Ad 3