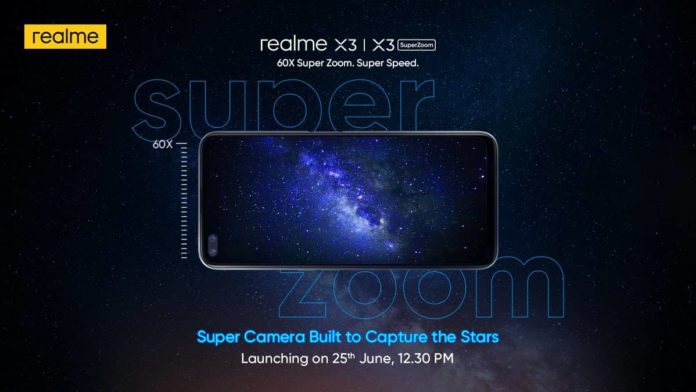 Chinese smartphone manufacturer Realme is all set to launch its new phone models X3 and X3 superzoom. The launch is set to happen next week through Flipkart on June 25. Realme has shared the same info on their social media channels to the public.

Realme X3 super zoom was already launched in Europe last month. The same model would be altered in specifications and launched in India. The sale would be on Flipkart on June 25, 12:30 PM.

There is not exact reveal about the pricing of the Realme X3 series smartphones. We have to wait for the launch date to know the pricing of these two devices. Anyhow, Realme X3 superzoom got a pricing of 499 Euros, which is roughly INR 43,000. We can expect the phone would be placed around the same cost. Along with the new smartphones, Realme is going to launch Realme Buds Q, which is competing against the Redmi earbuds S.

Get ready to capture crystal clear pictures even from 100 meters away only with the Periscope Lens that supports 0.5X to 60X wide zoom range.
60XSuperZoomSuperSpeed

Realme X3 is a 6.6-inch phone with a screen refresh rate of 120Hz with an LCD panel—Qualcomm Snapdragon 855+ SoC with a huge RAM of 12 GB and a storage space of 256 GB. There is a quad-camera set-up at the rear in a combination of 64 MP camera with two 8 MP cameras and one 2 MP camera. The selfie camera is of 32- MP with another 8 MP sensor along with a powerful battery of 4,200 mAh supported by a 30W dart charger.

On the other hand, Realme X comes with a 6.57-inch display, and another difference from the superzoom is of the 48-MP camera sensor. Also, the battery is powered by 4,100 mAh, and we may expect a dart charger for the same. Further details have to be revealed during the launch day, and we might get more clarity about Realme’s upcoming smartphone.