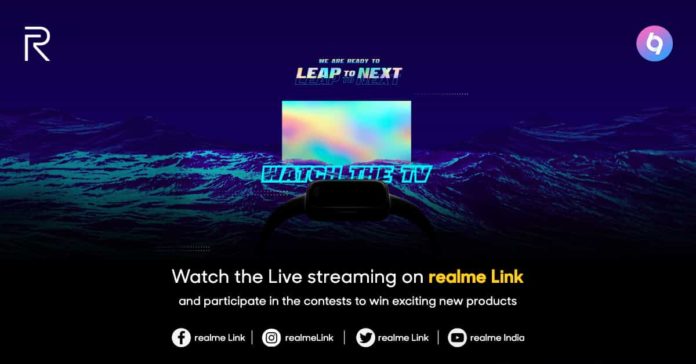 Realme is going to launch its three new products today through an online launch event. This launch event marks the entry of Realme into the new IoT product category. Realme’s Smartwatch, Smart TV, and Realme buds air are going to be launched.

The launch event will start at 12:30 PM today with live streaming can be watched on official social media handles of Realme. Realme is set to launch a new 10,000mAh power bank along with its Smart Watch, Smart Tv, and Buds Air Earphones. As of now, we know about four products of Realme. Realme might make an announcement on its upcoming phones in the market.

As per company claims, Realme TV comes with a bezel-less display with a brightness intensity of 400 nits. Chroma boost picture engine is an additional feature to increase image processing. 64-bit MediaTek Chipset runs the smart TV assisted by mali 470 MP3 GPU. Also, this TV comes with four speakers with an output of 24W.

The smartwatch comes with a 1.4-inch touchscreen colored display with colorful straps. It also facilitates a health assistant that works 24/7 along with the assistance of fitness and activity tracker. We can control music playback and camera using the feature in the smartwatch.

Realme is coming with a 10,000 mAh power bank. The image of the same was revealed on the official twitter account of the company.

The prices of these products are not yet revealed, and we would know once the launch event takes off.