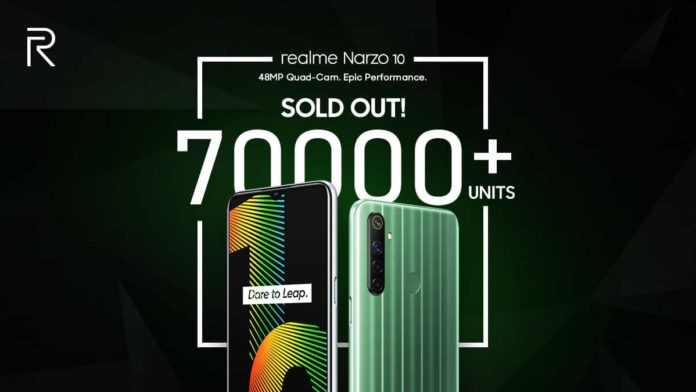 Realme has been well in the race of budget smartphones with Redmi and doing well from a quite good time. Every time they came up with a new model such as Realme 5 Pro, 6 Pro, and XT, they have got record sales of mobile units.

Realme has once again announced itself with another new model Realme Narzo 10, and its flash sale has happened through Flipkart on May 18th at noon. On a record note, over 70,000 units of Realme Narzo got sold in  3 minutes.

70,000+ units sold in less than 3 mins!
Thank you for your terrific response and love to the most powerful Quad Camera smartphone in its segment, #realmeNarzo10.
Stay tuned for the next sale. pic.twitter.com/5il6W9kSsP

Realme Narzo 10 sold at INR 11,999 available in two color options of white and green. One has to wait for the next sale to get hands-on this amazingly featured budget phone.

Realme became the first phone, which is coming with MediaTek Helio G80 SoC chipset.  It comes with a 4 GB RAM and 128 GB internal storage space to give extra space for the user without searching for external storage space. The rear camera comes with four sensors of 48MP + 8 MP + 2MP + 2 MP along with a 16 MP selfie camera.

The 6.5-inch display gives a decent body-to-screen ratio along with a powerful 5000 mAh battery for long term usage. Realme has followed the waterdrop notch fashion to keep the users interested in this fancy notch on the screen. Also, Realme has continued the design of the Rear-mounted fingerprint sensor, which is the case with many smartphones these days.

It is undoubtedly a good deal for a budget phone with stable features at an affordable price from a reliable brand. Realme looks like to become the new Redmi of the smartphone market. The next sale of Realme Narzo 10 is scheduled on May 22nd, exclusively on Flipkart. After considering the demand for the first sale,  the upcoming sale also might be on record levels for Realme.