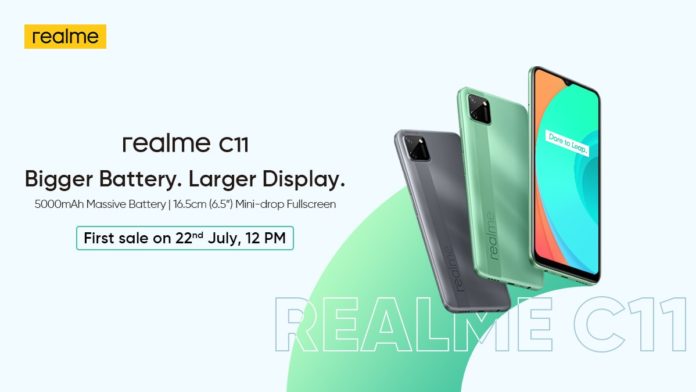 Realme has announced its new budget smartphone Realme C11 in India. The smartphone was earlier launched in Malaysia, India is the second market to get this phone.

Realme C11 is a budget phone from the brand. 5000mAh of massive battery, MediaTek Helio G35 Processor and 6.5 inch HD plus mini drop display are its main highlighted features. The phone has geometric arc textured design on its back, and it is available in two colour variants Rich Green and Rich Grey.

The phone has been launched at Rs. 7499 in India. The phone will be available via Realme Store and Flipkart. The C11 will be sold via flash sales. The first sale of the phone is held on 22nd July at 12 PM.

Realme C11 has a 6.5 inch Mini Drop style IPS HD Plus display with a resolution of 1600 x 720. The display has a screen to body ratio of 88.7 per cent. The notch at the top holds a 5MP camera for Selfies and Video Calls.

The phone has dual camera setup of 13MP + 2MP sensors on the backside of the phone. The primary 13MP sensor is a 5P lens with an aperture of f/2.2, and the second 2MP sensor is a portrait lens with f/2.4 aperture. You can record up to 1080p videos at 30fps from both front and rear cameras.

Realme C11 runs on MediaTek Helio G35 SoC which is clocked at 2.3GHz. It has 2GB of RAM and 32GB of internal storage which is expandable up to 256GB via an external MicroSD card. It has three card slot so that you can use two sim cards and 1 MicroSD card at the same time.

The smartphone is powered by 5000mAh of battery which also supports Reverse charging. Realme C11 runs on Realme UI which is based on Android 10. Sadly the phone does not have a fingerprint sensor which might disappoint some Realme fans.