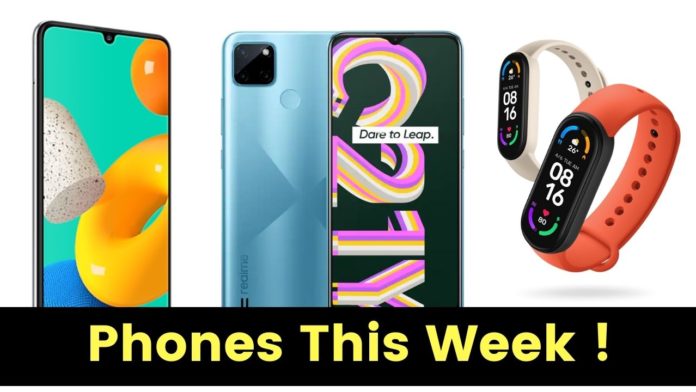 We have seen so many gadgets and smartphones in the last few days. We are in the last week of August, yet we have some exciting new phone launches this week.

In the coming days from 23 August to 29 August, Various phones and gadgets will be announced by the tech giants. Check out our list of products launching this week in India;

Realme this days is launching too many smartphones with confusing naming schemes. Let’s keep personal views aside; Realme plans to bring its new budget smartphone,, Realme C21Y to India. The phone was first launched in Vietnam a few days back.

The phone will be launched tomorrow that is on 23rd August. The phone features a 6.5-inch HD+ display panel. It runs on an Octa-Core Unisoc T610 SoC along with Mali-G52 GPU. It packs a 5000mAh battery. It is paired with 4GB RAM and 64GB of internal storage.

Vivo will launch its new mid-range phone Y33s tomorrow that is on Monday, August 23. It is a budget smartphone from the Chinese brand. It has 4G VoLTE,, and it runs on a MediaTek Helio G80 processor.

It will have a 50 megapixel main camera sensor on the back. The display features a dot notch style design. An 5000mAh battery will power the phone.

Samsung has been ruling the industry with its M series smartphones. After launching some flagship phones with 5G connectivity, Samsung is now ready to offer 5G connectivity to its budget M Series lineup.

On 25 August, Samsung will announce its new Galaxy M32s 5G phone in India. The phone will run on Dimensity 720 processor. The phone will have a 48-megapixel quad-camera setup on the back side. It is said to be powered by a massive 5000mAh of battery.

After the tremendous success of its Mi band 5 in India. Xiaomi is launching its new Mi Band 6 in India. The smartband will be launched at Smarter Living Event which is set on 26 August.

The brand has larger 2.44 inch display which is now more bright and offers a clear view in bright day light. More details regarding the band will be announced at the event.

Xiaomi is currently leading the television market of India. Xiaomi India is launching its next generation Mi TV 5X on 26th August in India. The tv will be offered in various sizes and will carry a mid range price tag.