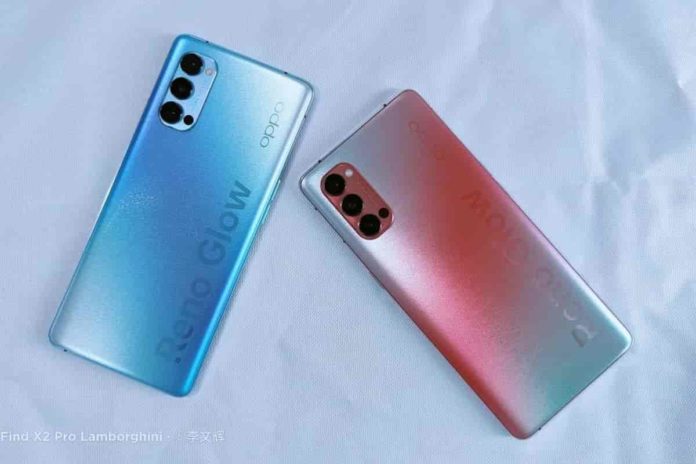 Oppo is bringing the fourth installment of their Reno series, naming it as Oppo Reno 4 and Reno 4 Pro. Updates and information about the upcoming Reno 4 series are already making rounds on the internet. As per the information given by a Chinese microblogging site, Oppo Reno 4 will be announced by June 5th in China.

The pricing of the Oppo Reno 4 series was not confirmed yet, and we have to wait and see till the launch date. Anyhow, one can purchase this phone. through T-mall

So far, the design and slight details about specifications were only leaked. Already the looks and other features have stunned everyone with the new model. There is an official teaser announced by Oppo has given a complete glance at the phone. Oppo Reno 4 series has an AMOLED display with an FHD+ 6.43-inch sized screen. There is punch-hole on display to accommodate the front camera to take selfies.

There is a triple rear camera setup with a combination of 48 MP  + 8 MP  + 2 MP.  Front-facing cameras are of 32 MP and 2 MP sensors, which gets accommodated in the pill-shaped notch on the screen. A Snapdragon 765G process powers the phones with a powerful 4,000 mAh battery. A 65W charger is supported to get the phone charged within no time.

Reno 4 Pro has slightly different specifications, but still, both are siblings in terms of many standard features. It has a slightly bigger screen of a 6.5-inch FHD+ S-AMOLED display. The Pro version has a curved display, which makes it look premium than the Vanilla version. Reno 4 Pro also sports triple camera setup with 48 MP + 12 MP + 13 MP, but there is only a single 32 MP camera at the front. We need to wait for some days to know more details about both models.