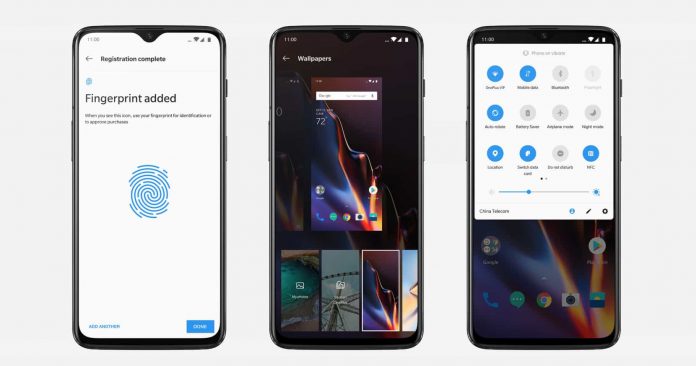 After the tremendous success of OnePlus 6 in India, Today OnePlus unveiled there new flagship smartphone OnePlus 6T. Compared to the previous generations of T series smartphones new OnePlus 6T is more advance and looks like a significant upgrade.

The new V-Shape Notch on the front top of the display looks minimal, The chins on bottom display are small now. Apart from the screen, the In-Display fingerprint sensor is one of the best features of this smartphone. According to OnePlus, this new in display fingerprint sensor can unlock your smartphone in just 0.3 seconds.
Price Details and Offers available on OnePlus 6T in India:
OnePlus 6T is available in three storage and RAM variants. The base model 6/128GB is priced at around 37,999 INR in India. 8GB RAM and 128GB storage model can purchase at 41,999 INR. The highest model with 8GB RAM and 256GB internal storage will cost you around 45,999 INR.
Its safe to say that finally OnePlus has crossed there bar and increased their price tag by a considerable margin. New OnePlus 6T is Amazon exclusive smartphone; you can purchase this device starting from November 1st Midnight.
Jio is offering 5400 INR instant cashback along with free 4G data up to 3TB. Citi Bank Credit and ICICI Bank Debit/Credit card holders can avail 2000 INR instant cashback on the purchase of this device. If you don’t have credit or debit card then purchase this phone via Amazon Pay, and get 1000 INR as cashback in your Amazon Pay Wallet. Servify Kotak Bank is also offering free damage protection on OnePlus 6T.
OnePlus 6T Specifications and Features:
In terms of design new, OnePlus 6T looks premium due to its sleek form factor. The glass panel on the back provides a more rich feel to it.
Talking about the specifications of OnePlus 6T, it sports a 6.4″ inch Optic AMOLED Full HD Plus display with 19.5:9 aspect ratio. This beautiful display is protected by the latest version of Corning Gorilla Glass 6. It runs on a Snapdragon 845 octa-core processor along with 6/8GB RAM & 128/256GB of UFS 2.1 internal storage.
OnePlus 6T comes with 16-megapixel primary and 20-megapixel secondary sensors on the back; both these sensors have f/1.7 wide aperture which will capture better low light photos. Keeping selfie smartphone lovers in mind, OnePlus has provided a 16-megapixel front camera which is a Sony IMX-371 Sensor.
OnePlus has also introduced new photography features Nightscape and Studio Lighting for OnePlus 6T and OnePlus 6. The first feature Nightscape will improve low light photography whereas the Studio Lighting feature will take better portrait shots in with studio like lights. These are just software-based features, and OnePlus could roll out these features to previous generations of OnePlus smartphones as well.
3700mAh Battery powers the OnePlus 6T. You can charge your device with the help of Type-C USB Port. This battery also supports 5V 4A Fast Charging technology.
This OnePlus 6T is 8.2 mm thin and weighs around 185g in Weight. Following sensors are present in OnePlus 6T, In-display Fingerprint Sensor, Hall, Accelerometer, Gyroscope, Proximity, RGB Ambient Light Sensor, Electronic Compass, and Sensor Core.
The OnePlus 6T runs on Android 9.0 and Oxygen OS on top of it. It is available in Midnight Black and Mirror Black colour variants. You can purchase this device online as well as offline.
Ad 3