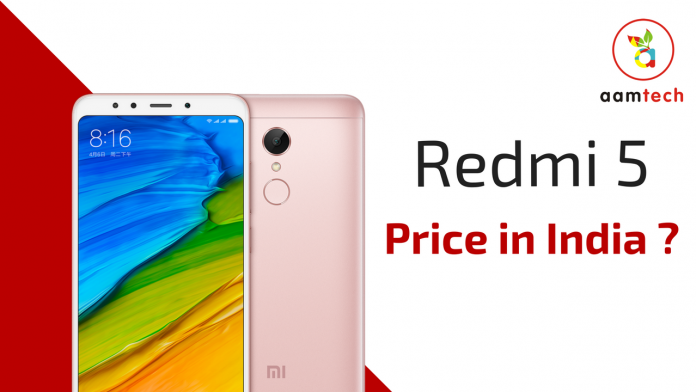 The unstoppable brand Xiaomi is growing so rapidly in India that just in few years it became India’s Number 1 Brand. Quality product and budget hardware make it different from other brands. It’s the budget segment where Xiaomi is unbeatable and Xiaomi knows it very well that’s why most of the time they bring budget smartphones in India.

Today we have some good news for budget smartphone buyers, Tomorrow Xiaomi is launching their new smartphone the Redmi 5. Some Reports suggest that xiaomi could launch two new models i.e. Redmi 5 and Redmi 5 Plus. Both these smartphones have been released in China last year so there won’t be much difference in specifications in Indian variants.

Just like the previous models from Xiaomi, the new Redmi 5 will also have the metallic unibody design. The new smartphone will come with a 5.7 inches HD Plus display that has an 18:9 aspect ratio. The Display will be protected by an unknown version of Corning Gorilla Glass.

Talking about the main hardware of the Redmi 5, It will come with a budget processor from Qualcomm. You can expect Snapdragon 450 Octa Core Processor in Indian variants as well. Just like the previous generation of Redmi series phones, we could see 3 different variants with different RAM and Storage options. 2GB, 3GB, and 4GB RAM model with 16GB, 32GB, and 64GB Storage could be launched in India.

To improve your photography experience there is a 12-megapixel rear camera with f/2.2. aperture. Phase Detection Auto Focus (PDAF) technology is present in the rear camera sensor. There is a 5-megapixel front camera for selfies and video calling. You can record up to 1080p videos at 30 fps from both rear and front camera.

This phone will run on Xiaomi’s own user interface MIUI 9, it is based on Android 7.1. Redmi 5 could come with a 3300mAh battery. Most likely this could be a disadvantage for Xiaomi as users are used to see a big 4000mAh battery in Redmi smartphones, 4000mAh battery was one of the reasons why users preferred it over the other phones.

As far as the colors are concerned Xiaomi could release Redmi 5 in four colors that are Black, Gold, Light Blue and Rose Gold. For now, we don’t have any information on its pricing but looking at past phones we can expect it to be around 7,999 to 9,999 INR. Well, That’s it for today if you have any questions regarding your phone you can ask us on WhatsApp (8888339324). Also, don’t forget to share this article with your friends and family members.