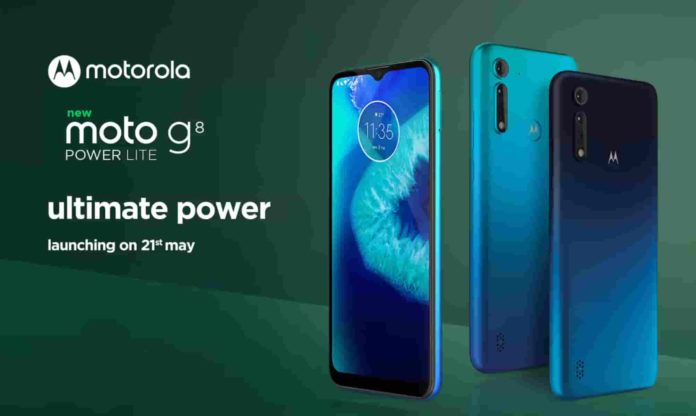 Motorola, The brand that lost its loyal fanbase in the last few years, is now working very hard to get back into the Indian market. After the launch of Moto Razr in India, Motorola is now preparing to launch a new mid-range smartphone G8 Power Lite.

Motorola has an event on 19 May at this event Motorola will launch its new smartphone Motorola Edge Plus in India.

In Europe, Moto G8 Power Lite is available for around EUR 169; When we convert this into Indian Rupees, it comes down to around Rs. 13,870. Indian prices may vary at the time of the launch.

The upcoming Moto G8 Power Lite features a 6.5 inch of IPS HD Plus display with a Notch on Top. The phone runs on Mediatek’s mid-range processor Helio P35 Chipset. The smartphone might launch in India with 4GB of RAM and 64GB of internal storage, which can be further expanded via an external sd card.

The phone features a triple 16+2+2 Megapixel camera setup on the back. For selfies, it has an 8 Megapixel camera on the front side. You can record up to 1080p videos at 30 fps from both rear and front cameras.

It is powered by a 5000mAh battery, which supports 10W of charging technology. On the software part, the Moto G8 Power Lite runs the previous generation Android 9.0 Pie.

As far as connectivity options are concerned, the phone has 4G VoLTE, WiFi 802.11 b/g/n, Bluetooth 4.2, Micro USB Port, and a 3.5mm audio jack. A fingerprint sensor is present on the backside of the phone.