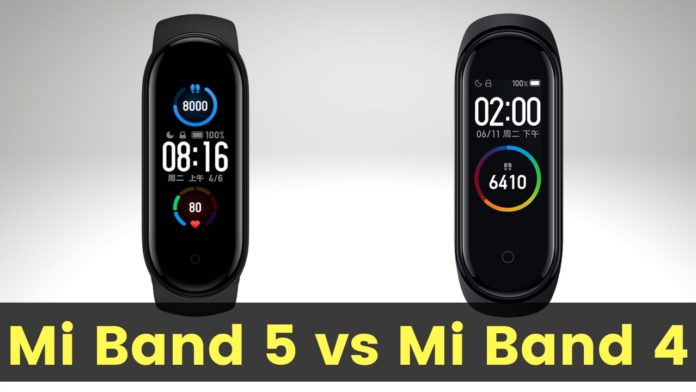 Mi Band 5 has a visibly bigger screen of 1.1-inch AMOLED display, which seems to be larger than Mi band 4, which is of 0.95-inch. A larger display provides better visibility. Talking about visibility the new Mi Band 5 offers better 450 nits of brightness, Whereas Mi Band 4 has 400 nits of Brightness.

Both bands have 2.5D glass protection with a built-in microphone for voice commands. Both bands are water-resistant up to the depth of 50m and can identify swimming strokes.

In terms of features, Mi Band 5 is ahead of Mi Band 4. The Mi Band 5 has various new features such as Women’s Health Tracker, Enhanced Sleep Tracking and Pressure Monitoring.

Mi Band 5 has new activity modes which can track your activities like Yoga, Elliptical, Skipping rope, Rowing Machine, and Indoor Cycle. It has SpO2 which is not present in Mi Band 4.

Around 100+ Watch faces are available for Mi Band 5 whereas Mi Band 4 only has 77 watch faces. Mi Band 5 also has exclusive Animated Watch faces. Additionally, Mi band 5 has the feature of remote shutter control, where you can operate your phone camera with the band to take pictures.

In terms of pricing, both bands carry a similar price tag. The basic version of Mi Band 5 costs around CNY 189, which is approximately INR 2,000. The NFC variant is tagged at a price of CNY 229, which is roughly INR 2,500. Mi Band 5 will be available via online sale after 18th June in China.