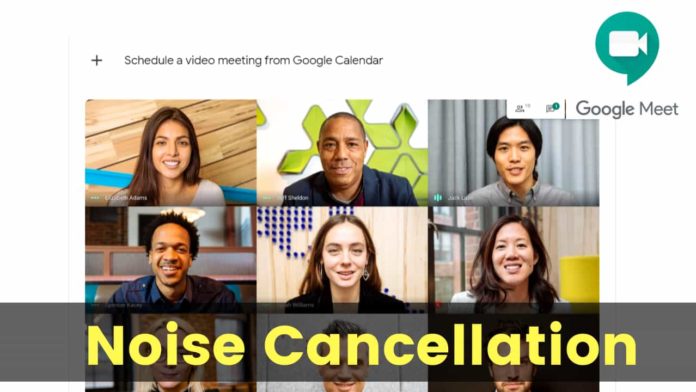 Google has rolled out the noise cancellation feature in its application Google Meet. The new feature is the AI-powered noise cancellation that reduced background noise, and the update started to roll-out. The G-Suite enterprise feature and education customer users of G-suite.

Interestingly, Google is rolling out this feature initially to the web application and then to iOS and Android gradually. Video leaked by a prominent youtube channel, ‘Venturebeat’, has revealed the new noise-cancellation feature of Google meet.

In the video, how to remove minor sounds such as clicking pens, crisp packets, or glass clinking. As per Google’s announcement, sounds such as dogs barking or keyboard typing sounds can be cancelled.

Google has been reportedly working on this feature for one year using its own meetings to tune the AI model. Google also added they wouldn’t be using any external videos to train the AI model of Google meet. Instead, only the internal customer support videos are used to tune the AI-powered noise cancellation.

Anyhow, Google is not the only company to introduce AI-based noise cancellation. The noise cancellation technology processing works in the cloud on a broader scale. Unlike, the solution offered by Nvidia’s RTX Voice Software, Google’s cloud solution would be more efficient and practical, given the smartphone solutions.

There is a toggle option to switch off and on the noise cancellation feature. Anyhow, this new feature will be ‘on’ by default in the app, the user can switch off the feature if you don’t want. There is no official announcement so far about the non-enterprise users to roll-out this feature.

So far, this update is for the enterprise G-suite users who can get their first try on this new feature. Google has indicated, this will be available for a wider audience in the future. Till then rest of the non-enterprise users need to wait for the feature to be rolled out.