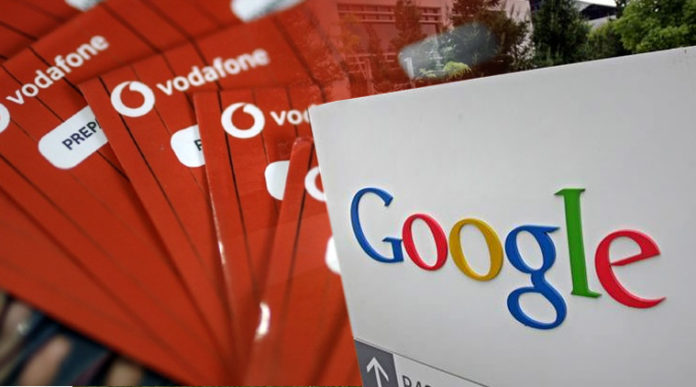 Amidst the struggle of British Telecom Company Vodafone in India, the tech giant Google is eyeing on buying stakes in Vodafone Idea. Google’s investment in Vodafone would keep it into the race against its competitor Facebook which has invested in Reliance Jio.

Facebook has invested in India’s youngest and biggest telecom company.  Financial Times reported that Google is looking to buy 5% stakes in Vodafone India. Anyhow, the response to this news did not come yet from Vodafone or Google.

Google seems to have followed Facebook and other private companies who invested 10 billion USD on Jio platforms. This recent move by Google would gain importance, as Vodafone has only 45% of the stake. There are already Rs—58,000 crore unpaid dues from their end.

The unpaid dues of Vodafone arose after the Supreme court has put Government’s decision on hold to include non-core businesses for calculating AGR (Adjusted Gross Revenue). It is share that is paid, spectrum fee, and license for the Exchequer.  The Department of Telecom (DOT) has sought relief upon payment tenures and has put pending payment bills from Bharti Airtel, Tata Group, and Vodafone Idea up to 1.19 Lakh Crores.

These Statuary dues have thrown Vodafone Idea into deep trouble. Many financial analysts also expressed concern over the longevity of the British Telecom company in the coming years. Following the crisis, the Chairman of Vodafone Mangalam Biral has stated that Vodafone may have to shut down if there was no relief given over the statuary dues.

The latest move by Google would change the equation for the Search giant and implement their plans. This might come as an offer in a critical time for Vodafone, and we might hope things might change for them soon. Also, Google is trying to penetrate India’s telecom market even more like other tech giants.