Home Apps Google Currents to be rolled out in place of Google Plus for...
Facebook
Twitter
Telegram
WhatsApp 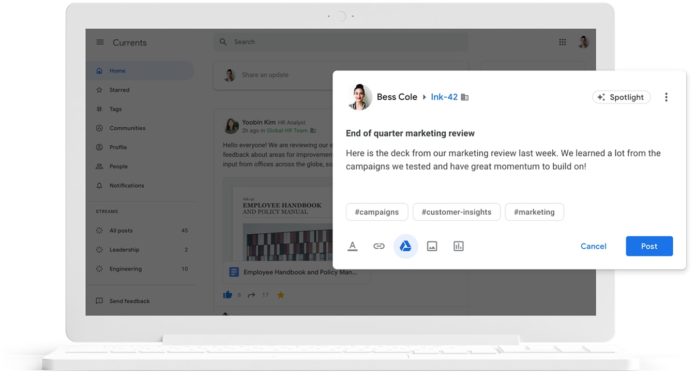 Google Plus was Google’s version of social media such as Facebook and Twitter, but it hardly got any attention. Google plus was launched way back in 2011, similar to other social networking platforms.

Anyhow, It was shut down in 2019, after a security breach that lead to data exposure. Google had to pull off the plug for Google plus, anyhow, Google plus is still available for G-Suite users.

Google currents are going to be launched next month as a replacement for Google Plus. Currents is an upgrade for Google plus with few revamps from the previous version. Google Currents came after taking down Google plus to enable employees in productive and meaningful communication with each other.

It was a beta version based on which Currents was released in the past. As per a few reports from G-suite users, Google currents will be rolled out soon on July 6th. This roll-out seems exclusive for G-suite users alone.

Soon after the Currents get launched, all the posts of G-Plus will be migrated to G-Currents. The URLs linked to G-plus also would be automatically redirected to Currents.

Google Currents is a facelifted version of Google plus with a better user experience than before. The home stream can be sorted chronological order or relevance. Sharing of texts, images, polls, and links can be done similarly to any other social media platform. The page admins have the facility to moderate content, check insights, and measure engagements. Once the G Suite administrators grant access, the user gets access to Google currents.

We have to wait and see how Google Currents would perform compared to Google Plus. One has to take note that Google’s currents magazine app in the play stand is different than the new Google Currents. We also have to see whether Google would bring this before all the Google users and announce its arrival or restrict it to G-suite users.