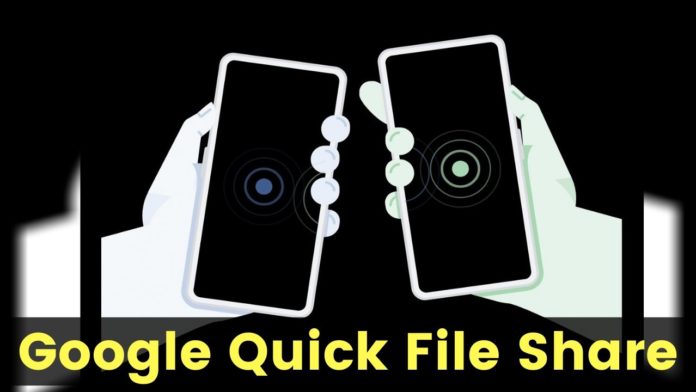 Google has finally announced its alternative for Apple’s Airdrop, which is used to share files with nearby devices. Probably for the same reason, Google has named the feature as “Nearby Share.”

Few android users have already witnessed this feature in the beta version. The beta version stage is currently in progress, and Google has stated they would share more details in future.

Google also added that the feature would be added for devices with Android 6 and above and also other platforms. This feature was indicated to work with Chromebook also. Nearby share by Android is an exact replacement for Airdrop of Apple.

This feature will allow the user to transfer files, photos, videos, links and tweets quickly between nearby devices. The feature is secure enough as one cannot send random content to strangers easily. It needs basic authentication as we saw in Apple Airdrop.

Samsung has already launched its quick share app, which allows users to transfer between nearby devices. Google’s feature has the advantage to work across any Android device, whereas Samsung’s app can only work with their devices alone.

Google’s Nearby share should have been launched long before, by considering its competitor Apple. This is actually a feature that adds value and utility for the users. Apple Airdrop is an integrated file sharing app where the file transfer happens hassle-free. We can expect, Google might also implement the same UI, which gives smoother experience for users.

Amidst the ban of Chinese app share it, this new feature may come handy for Android devices. Google might be still working on enhancing security. Features and would take some more time to launch.

Now, Apple has almost paralleled, Google regarding application featured in its iOS 14 updates. This new feature from Google looks like a good counter from Google to reciprocate Apple’s feature.