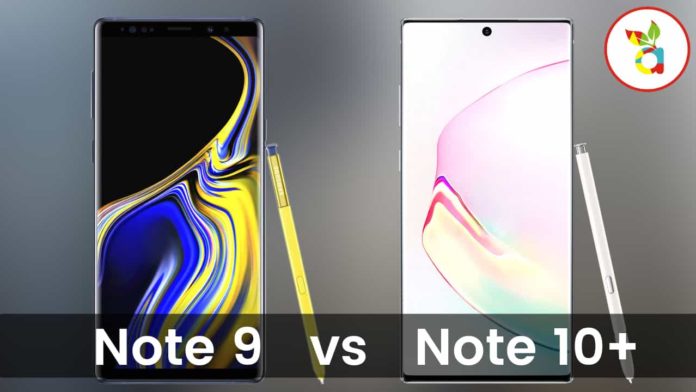 The Note 10 is the regular-sized Smartphone, whereas Note 10+ is the smaller version compared to the original one. Anyhow, there is not much difference in the hardware specifications and by looks both of them look very identical. Though, there is a difference in screen size and the number of cameras. With the arrival of new note series phones, there is an obvious comparison of Note 10 with Note 9 with the upgrade in specifications and technology.

When it comes to design, Samsung has retained the original box design of Note 9 without missing out on the authenticity of the Note design. The new Note 10 Phones have a small dot notch for camera whereas the Note 9 does not have any type of hole or notch on top of the display. The major design drawback of the new Note 10 Plus is that it does not have a 3.5mm jack.

When it comes to the processor, the Galaxy Note 9 came up with 10nm Exynos 9810 chipset. The latest, Note 10 and Note 10 Plus are powered by the latest Exynos 9820 SoC (Note: USA/China variants of Note 10 ship with Snapdragon 855 SoC). Overall, Samsung Note 10 Plus is a substantial upgrade from the Note 9 with few ramifications of its major features.

If you’re someone who is still using Note 8 and Note 9 then it’s right time for you to upgrade your phone to Note 10 and Note 10 Plus.

For more updates on technology join our Telegram channel @aamTECH