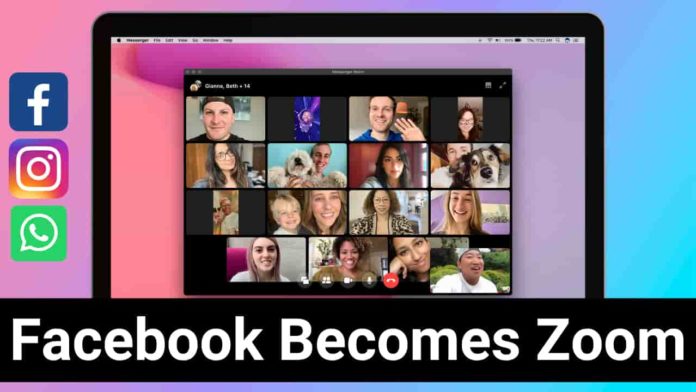 Facebook Messenger and Whatsapp have frequently been updating and giving new features to their users. Smart upgrades and betterment in the user interface were imbibed to the respective apps to enhance the user experience.

Constant updates to the interface in both Facebook and WhatsApp are keeping the users interested to use their apps regularly. Anyhow, when it comes to video calling experience, many other apps are way ahead than Facebook and WhatsApp, adding more room for additional features.

Recently, Facebook started to test the Messenger rooms feature, which allows up to 50 members at a time to participate in a video call. Now they have started to roll-out this feature officially to messenger users. The same feature is under testing with WhatsApp to enable more users to participate in the call. The 2.20.163 beta update of Whatsapp has revealed that the ‘Room’ feature will be available in the chat option, where you can create Messenger room by adding people.

This is integration between WhatsApp and Facebook. Once the user clicks on the ‘Room’ feature, it would redirect to the prompt whether he/she wants to link it to messenger rooms. As this feature is rolled out in the beta version, it might be soon launched in the stable version after the testing is done.

This feature looks like an alternative; Facebook has thought about to compete with rival apps. There has been increased demand for group calling amidst the corona pandemic as everyone is staying home. Amidst the doubt expressed over video calling apps, this new feature may help everyone to rely on a trusted Facebook app.

If you want to try out the new features in Facebook and WhatsApp, you can register yourself in the beta program of the applications through play store. You can get early access to exciting features and test them.

Add 0 before dialing to Mobile number from Landline says TRAI...