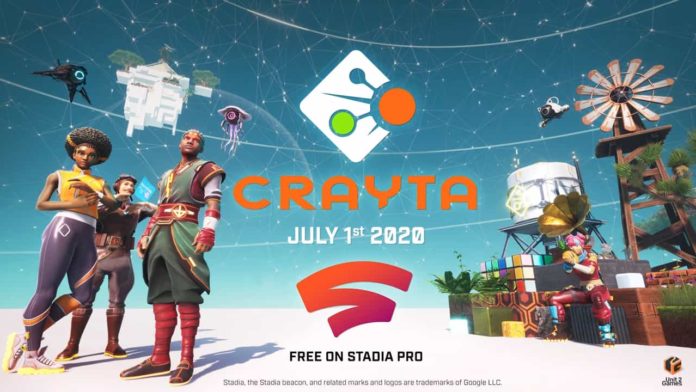 Google Stadia is going to launch a new game Crayta on July 1st, which has the support of state share in the beta version. Stadia has experimentally introduced the technology through state share, where a user can shift instantly to another person’s game through a link. This stadia title is first on Stadia, and it may also get launched in other consoles and PCs later.

Crayta was developed by Unit 2 games, and it was announced in April by Stadia, and the game looks more like Fortnite. It is due to the building mechanics and art style with the game creation inspired by Minecraft.

In the game, the players get a chance to create their own game using their own 3D Avatar. Also, the users can share their worlds with their friends through a game link. This feature allows the players to build and play collaboratively or choose to play a solo game.

The game creation supports various genres, using the game creation tools, the developer Unit 2 mentions, there are more genres to be launched soon. The game will support up to 20 players during the launch, and there would be post-launch support from the developers. The state share is an excellent addition for the game features,  where the players can share their games with a link.

Any user who clicks the link will be redirected to the game world created by you. Anyhow, the entering time for the other player to your world, is not mentioned by Google or unit 2. Anyhow, it is sure it might not take much time if the players are on stable high-speed connectivity.

The premium edition of Crayta will be free from Stadia pro subscribers, and it costs $39.99 for Stadia free users. We will have to wait and see how this new gaming experience would look like in Stadia.