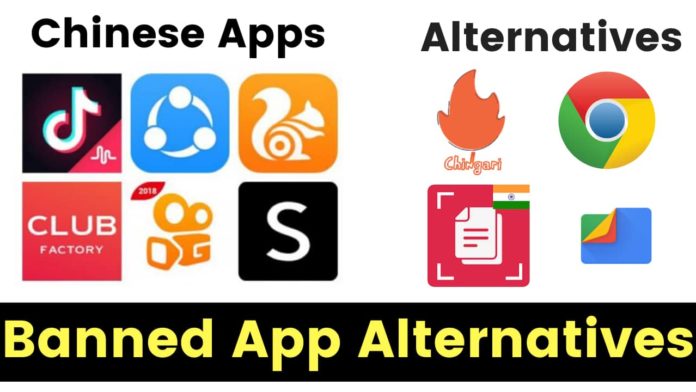 The ban on 59-Chinese apps by the Indian government, due to the potential threat to the security due to those apps. There are many big applications in the list of banned apps, which contained Tik Tok, UC Browser, Shareit.

All the listed apps under the ban list were already pulled off from the Google play store and App store of Android and iOS. This means no new user can be able to download these apps from the play store.

At the same time, those who had these apps downloaded in their phones cannot use them once the Internet providers block access. As soon as these apps were banned, everyone started to search for alternative apps for the same.

Tik Tok is one of the banned apps about which many were looking out for a non-Chinese alternative. Along with Tik Tok, Helo, Likee, and Vlog video were also video-making apps. Roposo, Mitraon, and Chingaari are the Indian alternatives one can give a try.

Camscanner is yet another application that is widely used by many in India to scan files in PDF and JPEG format. Adobe scan and Microsoft Office Lens were found to be the reliable alternatives for Camscanner.

Clean master, Cache Cleaner, Virus Cleaner are best used to scan phones to remove any malware or virus on the phone. AVG cleaner and Phone master are available in the play store and app store.

UC Browser, CM Browser, DU Browser, and APUS Browser are the Chinese apps used often by the users. Google Chrome, Opera Mini and Firefox are undoubtedly the best replacement of the Chinese browsers.

Mi Video call and Wechat are social messaging apps which many of us are using. But Whatsapp, Telegram is the best alternative for the banned Chinese apps.