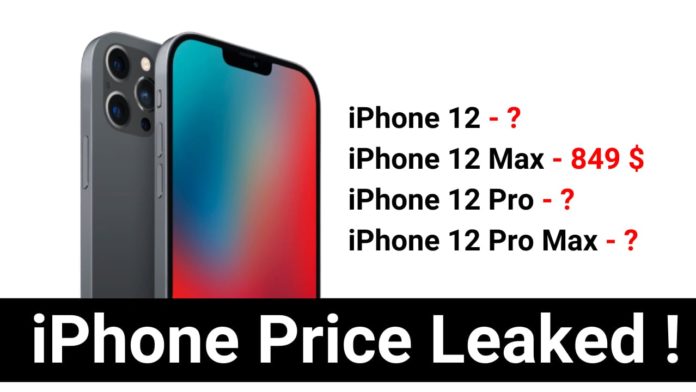 iPhone 12 Series phones are the most awaited phones of the year. Due to which various leaks regarding the iPhone 12 phones are monitored very keenly by tech enthusiasts. Recently a trusted leakster Jon Prosser has shared some new information on the internet today. He is the same person who leaked accurate info on iPhone SE 2020.

iPhone 12 will be the smallest iPhone among all four iPhones launching this year. It will sport an 5.4 inch Super Retina OLED display, which will be manufactured by BOE. It will have 4GB of RAM and two storage options 128GB and 256GB. For photography dual camera setup is present at the backside of the phone.

iPhone 12 Max sports a 6.1 inch Super Retina OLED Display. Apart from the display, all the remaining hardware present on the iPhone 12 Max is the same as iPhone 12. The 128GB base model of the iPhone 12 Max will be available at $ 749 and 256GB at $ 849. Though we are pretty sure that Apple might add extra mAh of the battery into 12 Max compared to the iPhone 12, But we will have to wait till its launch.

iPhone 12 Pro will replace the iPhone 11 Pro. It will come with an 6.1 inch Super Retina XDR with ProMotion display. This new OLED Panel will be manufactured by Samsung. It will also have a 10-bit color depth. iPhone 12 Pro will run on a new A14 processor with 6GB of RAM.

Apple would launch these four new iPhones in the first week of September 2020. At this same event, Apple could also launch new On-Ear Apple Studio headphones.